NSX 6.4 release was announced in January. This is a dot release – one that brings many major features. The new features are broadly classified into Core Feature enhancements, Advanced Micro-segmentation and Ease of Use and Serviceability features,

Head over to the NSX 6.4 Official page here, in the meantime here are some thoughts.

The primary new feature that 6.4 delivers is the ability to provide L7 granularity in the Distributed Firewall. DFW adds layer-7 based application context for flow control and micro-segmentation. Initially, approximately 60 commonly used application signatures are supported in this release.

This official VMware blog does a great job of explaining the Context Awareness in a great detail. At a very high level ther users can now use the APP ID to provide a more granular policy. This allows security policy based on applications, even if they don’t use the standard ports.

There is also RDSH or Multi Session Identity Firewall which allows application access on a shared desktop based on user ID. In other words, two users accessing the same desktop can be provided access to different applications based on their user group affiliations. NSX previously supported Identity Firewall based on integration with Active Directory. This provides granularity at the Virtual Desktop level. See a detailed demo of RDSH here .

Ease of Use and Serviceability

Upgrade Co-ordinator: This feature is bound to significantly ease any NSX System upgrade pains. Upgrades can now be co-ordinated and managed from the NSX Upgrade Co-ordinator which offers a single pane to manage the upgrade of various components. This handy features also allows you to automate the upgrade process. The tool also performs a pre-check to ensure system upgrade will only if the system is healthy to begin with.

Several features are now available under HTML5 (as well as Flash). They have the same feature functionality.

Here is a detailed video of 6.4 Upgrade Co-ordinator.

Upgrade Co-ordinator offers two modes- Custom upgrade plan and One Click Upgrade. It also provides an inventory of the NSX components and lists the current version and target version. NSX manager upgrade is required as a precursor to this step.

One Click Upgrade pre-defines the upgrade sequence and displays the settings which cannot be modified. The “Plan your upgrade” option allows you to choose which components you want to include in the upgrade and provides the some other knobs. 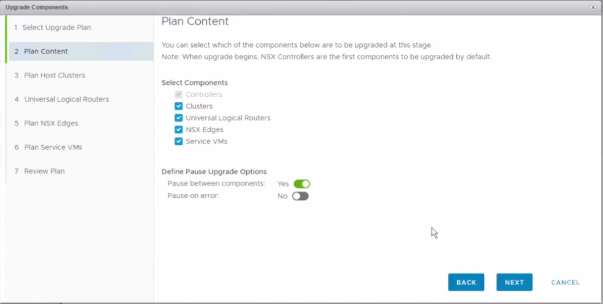 Lastly, this also allows you to monitor the upgrade progress for each component.

NSX 6.4 now allows the user to capture packets from the Web-UI itself.  While this was previously supported via CLI, users can now start a packet capture for debugging purposes from the Web client without necessarily being familiar with the CLI. There are 4 points along the data path where packets can be captured: Physical, VMKernel, vNIC and vDR port. A more expansive list is available via CLI. User must specify the direction of the traffic to be captured. Only one direction is supported but multiple sessions can be created for rx and tx and then combined using Wireshark.

Lastly, as you have probably noticed from 6.3, the dashboard continues to gets enhanced with handy widgets that are a great for a single point of visibility into NSX component health. System Scale is a new widget which provides alerts and warnings when you approach scale limits. Here is a snapshot of the new and improved dashboard.

In addition, a new tab for System Scale provides a global view of Object Types and their counts per NSX manager. This includes Firewall Rules, Security Groups, number of hosts prepared etc.

Other Blogs related to this topic: